We are seeking residents and businesses of the village to sign up and commit to back the neighborhood. Over the coming weeks, we will be working with local retailers and restaurants to explore ways to reward local residents for their loyalty, to form a new community council to work on new neighborhood initiatives, and to drive deeper local cooperation between residents, retailers, restaurants and small businesses.

If you care about the resilience of our unique neighborhood please sign our form and we’ll keep you informed of our progress.
Join the movement

Spotlighting The Work of Under-represented Artists – Art On The Ave

In 2020 in the middle of the pandemic Jackie and Barbara turned Columbus Avenue's empty storefronts into a gallery space. This is their story.
Mother and daughter team Barbara Anderson and Jackie Graham’s response to the pandemic, the shuttered stores, barren windows and deserted neighborhoods was to create an on-street social initiative to support local artists and bring life back to the streets.
Turning New York’s Columbus Avenue’s empty storefronts into a gallery space, Art on the Ave reimagines street art and democratizes art spaces and access.
Their second exhibition launches in the West Village and runs from April through May. In one year Art on the Avenue has established itself as an organization that spotlights the work of under-represented artists.
After over 150 submissions to their latest exhibition, their curated works will be displayed along Bleecker Street, Christopher Street and Hudson Street, creating what Barbara calls the West Village wander.
Through organization like Art on the Ave and collaborations with initiatives like Back The Neighborhood, we can reimagine what a neighborhood is, and build common-unity.

“Art on the Ave will not just liven up shopfronts and activate the street, but it will put artists at the center of a discussion that has to happen. A discussion about community and change, about history and healing, about division and diversity.
Showcasing the work of local artists will amplify voices that need to be heard. Voices that tell stories about the marginalized and the disenfranchised – from the Indigenous people who once lived in Manhattan, to the under-served citizens who were disproportionately affected by COVID-19, and the peaceful protestors with a legitimate case to make.
We want this initiative to have a legacy of its own. We know that a ‘pop up’ parade of art in shop windows is fleeting and temporary, but it marks the beginning of something more lasting and meaningful. It’s not enough on its own, but it is enough to get started. We have a chance here to create a “socially distanced” gallery walk. We hope you’ll walk it with us.”
PrevPrevious
NextNext 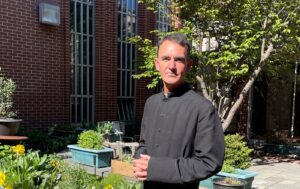 Saint John’s in the Village Rector, Father Graeme Napier is focused on building community in his parish and addressing inequity. This is how he addressed that over the last year. 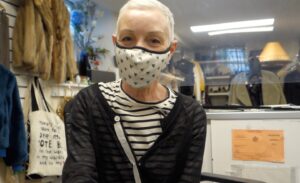 Lani Steinberg is the Manager of St Lukes Thrift Shop. This interview is an eye opener to the realities of what has occurred since Covid struck. 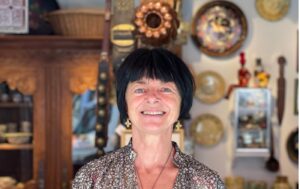 France meets NYC in this charming corner store in the West Village. Founder Claude Noelle Toly discusses past, present, and future of retail in the Village.

For Latest News and Events